Don Currie of North Vancouver, B.C. has been a volunteer and supporter since the inception of the Nanton Lancaster Society. He attended our Grand Opening in 1992 and was selected
to unveil the “Lifetime Members” plaque board. In 1999, he led the detective work that eventually tracked down the family of Sgt. Albert Prince, the first Canadian serviceman to be lost during World War II. 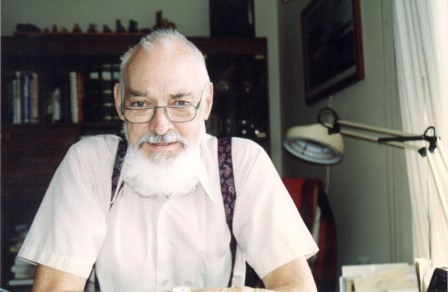 H2S was a development from the British ASV (Air to Surface Vessel) radar, mounted in an aircraft. This had a steerable radar beam, and was used over water to search for surface objects such as submarines. It was bulky, had a range of about 6 miles, but it did not have a good receiver, and could be confused by high waves.

H2S, an airborne radar ground reflection system was a direct descendant of ASV. It used a Plan Position Indicator, (PPI), which was a “cathode ray tube (CRT)” much like a modern TV picture tube, and a much improved magnetron. (The magnetron is the heart of the microwave oven used today). The Telecommunications Research Establishment (TRE) got the first working magnetron in the spring of 1940.

The scanner, mounted beneath the aircraft, transmitted a directional beam of high energy impulses directly down and forward towards the ground. The scanner rotated at the rate of about once per second, and reflections received from the ground of its impulses were received back at the scanner and fed into the PPI receiver in front of the Navigator Observer. This PPI had a radial scanning line from its centre to its circumference rotating in phase with the scanner. As the signal came back and was received, it showed up as bright spots on the screen, and the high persistence phosphor painted a map similar to the built up areas being scanned. This display would fade slowly, to be updated by the sweep on the next pass. This gave the operator a constant updating of the terrain below and forward as the aircraft flew along.

It showed bright returns over built up cities and towns, very little return over flat countryside, and no return over water, so rivers and canals could be identified, and, where these might run through a built up area, could provide precise aiming points for blind bombing.

It had three ranges, 30, 20 and 10 corresponding roughly to the range in miles, and the scale of magnification. At 30, with a topographic map of the course, towns and villages could be identified, and an accurate bearing and distance determined to give the position of the aircraft. Deviations from the planned course could be quickly identified and corrections made. The 20 scale was mainly used for obtaining the true height of the aircraft for bombing purposes. The 10 scale gave the greatest magnification and was used to determine any last minute corrections and aiming points for the run up to the target, and for blind bombing.

It was developed in the utmost secrecy, along with a similar tube device. For every type of radar there can be a countermeasure developed and it was critical to keep any word of this work getting back to the Germans. A noted British scientist in radio waves (well known to the Germans) was secretly drafted to head its development. The basis of the unit, the magnetron, had been developed in 1940. With some changes to its construction scientists were able to get a much-improved range. H2S and its alternate were worked on by the same group of “boffins”.

Two Halifax aircraft were assigned to the test station for testing the units. Tests of the alternate proved disappointing so they concentrated on improving H2S. Unfortunately, on one of its test flights, it crashed, killing all aboard. The chief scientist and a number of his staff were killed, as well as all the RAF aircrew When word of this reached Winston Churchill he is said to have the issued an order that all details were to be kept secret. It would give aid and comfort to the Germans to find out that the chief scientist had been killed, as they well knew his reputation It was not until years later, that details of the crash were released in Britain.

Part of the research was to find a way to prevent the Germans getting their hands on an H2S system from a downed aircraft. Attempts to blow it up on the ground were not successful, and blowing it up in the air would certainly doom all the crew. The hope was that all its details could be kept secret until it had been fully deployed to the RAF.

But some twit of an RAF officer (probably the same one who had said “Call it H2S – it stinks.” decided it needed to be tested against the Dutch coast, so one marked “EXP 2” was installed in a lumbering Stirling aircraft and sent (escorts unknown) to determine if it could identify Rotterdam. It was promptly shot down by the Germans, who were surprised to find this equipment as it had not been part of any Stirling aircraft shot down previously. The Germans called it the “Rotterdam Apparatus,” took it all back to one of their test stations, where they mounted the scanner on top of a flak tower, hooked it up, and were surprised to find that it showed them a picture of the local topography. From this they deduced its use, and having it as a working example, were able to develop their Naxos countermeasure many months earlier than otherwise would have been the case.

H2S gave every aircraft in which it was installed a self-contained location finder. It was completely independent of ground station radar, and I would suggest it was the most successful invention of the war. GEE, invented earlier, and Oboe, invented later, were both successful ground based short and long radar systems used during the war.

A number of studies done after the war have tried to downgrade the accuracy of British bombing. However you can be sure the accuracy would have been considerably less had these three inventions not been used.

Two atomic bombs ended the war, but it was radar in all its forms that won it.

Thomas Fetherston – A Name in the Sand