The idea of using an elite corp of crews with high navigational ability evolved from the somewhat limited accuracy of bomber crews during the early years of the war together with the development of more sophisticated and difficult to use electronic navigational aids. Although originally opposed by Arthur Harris, the officer in charge of Bomber Command, hand-picked crews from operational bomber squadrons were transferred to form the Pathfinder Force in August of 1942. 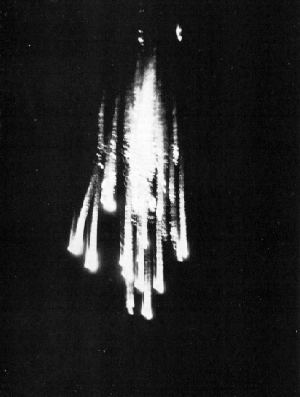 The P.F.F. was commanded by veteran Australian bomber pilot, D.C.T. Bennett, who retained command throughout the war. It began operations within a few hours of its formation and continued its work of leading the main force against the enemy until the bombers’ offensive ceased, shortly before V.E. Day.

A variety of techniques for marking targets with green, red, and yellow flares were utilized depending on cloud conditions. Often an initial marking of the target was improved upon or altered as the raid progressed.

The gallantry of the Pathfinder Force is legendary, and its contribution to the war effort immense, perfecting as it did techniques for precision main force bombing. Probably the greatest of many successes was its part in the sustained Battle of the Ruhr.

The PFF flew a total of 50,490 individual sorties against some 3440 targets. The cost in human lives was grievous. At least 3727 members were killed on operations including Nanton native, Glen Ransom, a pilot with 83 Sqd RAF, which served with the Pathfinder Force.

405 Sqd. was formed in April, 1941, and flew the RCAF’s first bombing operation ten weeks later on June 12th. Initially flying Wellingtons, the squadron converted to Halifaxes and then finally to Lancasters. The only Canadian-built Lancaster to fly with No. 405 was the first off the Malton, Ontario assembly line, KB700.

In April, 1943 the squadron was selected to join No. 8 (Pathfinder) Group with which it served until the end of the war. It was the only Royal Canadian Air Force Squadron which was a part of the Pathfinder Force. As its last operation before V.E. Day, the squadron marked the aiming point for other Bomber Command Lancasters detailed to drop supplies to the starving Dutch civilians at Rotterdam.

The squadron flew back to Canada in June 1945 and was disbanded at Scoudouc, New Brunswick in September. It was reformed in 1950 at Greenwood, Nova Scotia as the RCAF’s first maritime squadron again flying Lancasters. The squadron is still operational at Greenwood, flying the Aurora aircraft.

“He was a man who would not accept second best; success on one day was only a springboard for greater success on the next day. He was restless, imaginative, and receptive to new ideas from his subordinates. All who served under him knew that he would never ask anyone to do anything he would not have been prepared to do himself – the hallmark of a true leader. One pilot who served with him wrote: The loyalty shown to him by 8 group was derived mainly from his example and in the knowledge that anything we would do, he could do better.”

Americans in the RCAF