The Sorpe was an earth-work embankment construction type of dam and Wallis’s weapon was not designed for this type of structure. In fact, the squadron priorities were the Mohne and the Eder. If possible, the intent was attack the Sorpe by flying along its axis and dropping the weapon in a conventional manner with the hope that it might crack the centre, watertight concrete core so as to start a leak which might in time destroy the dam.

The Sorpe was not defended but flying into position to drop the bomb was extremely difficult. RCAF pilot Joe McCarthy was the first to attack, dropping the bomb accurately on his tenth attempt. Minor damage was done to the parapet but the dam held. 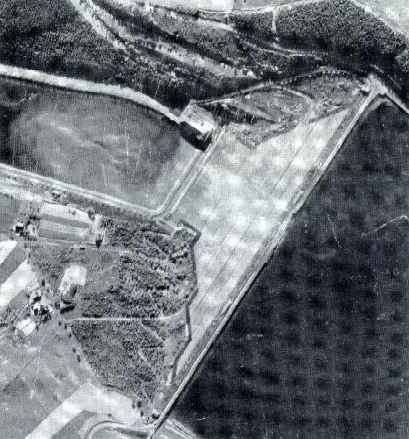 The Sorpe Dam was concealed by a swirling mist when Canadian Ken Brown arrived. He too had great difficulty, both in avoiding a church spire and in getting properly lined up for his attack in the hilly terrain. In all he made eight perilously low runs (at 60 feet) without being able to drop his weapon. Finally he dropped his bomb accurately creating a spout of water 1000 feet high but failing to breach the dam.

“The only problem was the whole damn valley was full of fog when we arrived there. They told us that there would be a church up on top of the village. We found that all right -but just the spire of the church.”
– F/Sgt. Ken Brown